What You’ll Learn from this Episode about Being a Mentor and Having a Mentor with Tyson Sharpe: 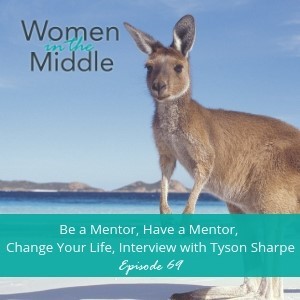 Having a mentor can totally change your life. And, there are many similarities between being in transition after college and in in midlife. This week’s episode features another interview in the Midlife Mentorship Mini-Series, but this week you meet an amazing younger-than-normal guest who shares some insight with you about transitions.

In fact, we’re switching things up a bit. My guest is not a Women in the Middle.

In fact, he’s not a woman. And he’s not in the middle. He’s a 28 year old guy who I’ve had the pleasure of coaching and mentoring this past year.

My guest this week is Tyson Sharpe. It’s been so incredibly fulfilling for me to coach Tyson as he was at the brink of making some really significant changes to grow his coaching business. I’m a firm believer in the importance of not only HAVING a mentor in midlife, but also BEING a mentor in midlife. What an opportunity it is to give back to someone who is ready to learn.

Tyson was frustrated with his progress because as hard as he worked, he realized he wasn’t getting the results he wanted to see in his business. Like so many midlife women, he felt stuck. He was passionate and trying all kinds of strategies. He wasn’t procrastinating, but there was clearly an issue. He was pretty sure the problem had to be something to do with his internal thought patterns, so he reached out for help.

Transitions like this can be difficult. His personal story of going from being poor travelling student, to feeling stuck, to finally creating a business is pretty similar to the common midlife transition stories of so many women in the middle. A life transition is a big change; change often means a big decision; big decisions can be difficult to make and can keep you stuck.

Tyson eventually learned how to invest in himself and make big, bold decisions. He used courage, insight and creativity now like there’s no tomorrow. Ultimately, how he learned to view himself is what led to his business success and mindset shifts. Stepping into his own expertise took time but it was worth it!

To check out the Women in the Middle Academy, my new 6 month coaching program where you can get unstuck, get clear and finally feel free! Love your life after 50! Join us! Head over to www.womeninthemiddleacademy.com