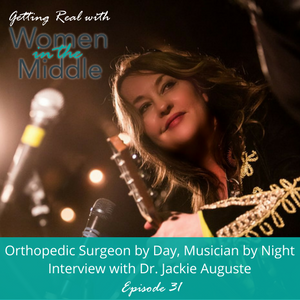 What you’ll learn about Joy from Being a Orthopedic Surgeon by Day and a Musician at Night in Midlife with Dr. Jackie Auguste.

This week, I introduce you to Dr. Jackie Auguste, a successful Orthopedic Surgeon by day and musician, songwriter and singer at night with the Canadian Band, Across the Board. Jackie is a woman in the middle who knew that being a doctor wasn’t enough when it came to being joyful; she really needed to follow a musical path in a serious way to feel creatively challenged and fulfilled. She knew nothing about running her own music business, and yes, she was busy. But she understood that her life wouldn’t be as meaningful as it could be without more music.

Jackie decided to dive in. Even with a thriving medical practice, she started a band. The musicians involved represent a wide variety of ages, stages and professions. This inspired the name of the band, Across the Board.

Now about five years old, Across the Board is an award-winning Canadian indie pop-rock band of multi-instrumental musicians who push their pop rock sounds to the edge of the rock ‘n roll envelope. With over 160 Youtube videos, a debut album and recent new award-winning EP, ATB has won critical acclaim with four independent music awards for their singles “Indifference”, “Don’t Drag Me Down”, and new EP “Amends”.

Jackie is a woman in the middle who is one of kind. She sets the bar high and goes for it, both with her patients and also with her musical creativity. Like so many of the episodes in this podcast, Jackie shows us how you can really do what you want when you open yourself up to growing, be true to yourself and to take a risk. She’s happier and more fulfilled than ever before.