Choosing the right neighbourhood to raise your family in is super important.

I was pregnant with my first when we bought our first house.

My husband pushed to move into this weird little dated community in the north end of the City of Toronto called “Bathurst Manor.” I hadn’t grown up in Toronto, so I didn’t share his warm memories of the neighbourhood like he did. He even went to the local high school.

As you can tell, I didn’t like the idea of moving here at first.

I saw outdated side split homes, a plaza that was very run down and few sidewalks. Very Brady Bunch looking, without the charm.

However, once I realized how much you got for your money in this little neighborhood pocket, I changed my mind. I loved the idea of having a two-car garage and decent plot of land. I heard the school district was good too, but it was hard to imagine life with teenagers when only pregnant with my first.

There were lots of things I couldn’t anticipate or even imagine at that point in my life, 21 years ago.

One of the biggest surprises was the number of new, local friendships. Community. Extended family in the form of the “neighbourhood gang” – both parents and kids.

We met so many people who also had young families and dogs. It was easy to fit right in and start sharing our lives.

We were in our 30s at the time, new to parenting. Enjoying our babies. Going for walks with strollers. Hanging out at the local park and playground.

As the kids grew, they also became good friends. At first, they were friends because the parents were friends. But then, real friendships developed. I have three sons and it was odd that most of my neighbourhood friends also had sons. Lots of guys to hang with. So easy. So great.

And hang out they did.

They didn’t all go to the same schools. In a large city like Toronto, there’s a lot of choice when it comes to schools. So the kids had to make more of an effort to play together because they all didn’t naturally see each other every day at school.

Over the years, they supported each other through lots of ups, downs and changes.

Most recently, they all seemed to get their wisdom teeth out within months of each other. They were particularly hilarious as they recorded themselves coming out of the sedation.

Together, they also dealt with adjusting to wearing glasses and braces, and also supported each other through successes and failures. Some of the most difficult times were dealing with illness and death in the family. They were there for each other.

My two older sons are now in university.

They experienced the “last neighborhood hangout” within the last few years; now it’s my youngest son’s turn. You see, my youngest is a January baby. He’s always been the oldest in his class.  He’s going into Grade 12 next year; however, his neighborhood buddies are between three weeks and nine months older than he is….but in the school year ahead of him.

His neighborhood friends just graduated from high school and are off to college and university next Fall. He, on the other hand, is the last man standing so to speak. One more year until he goes to university too.

I overheard him comment about this milestone last week as he recognized that Thursday night was the last time he and his friends would be hanging out playing video games like they had done for over a decade.

Once everyone went to off to camp and then school, no one knew when they would all be home together like this again.  He knew things were changing.

It’s bad enough I have to cope with my own empty nest….but it looks like I have to adjust to the neighborhood guys leaving too. 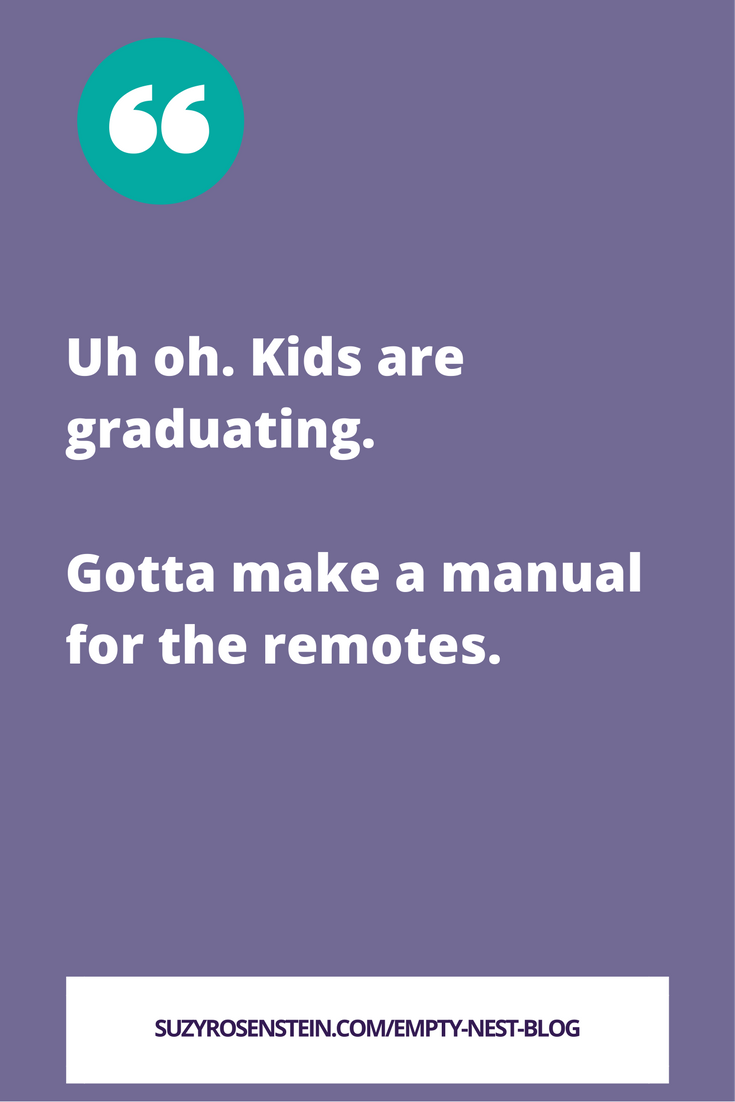 I know these kids so well.

I loved that we had the hangout house.

I’m not sure why it worked out this way. Maybe it was the video game set up, the pool table or perhaps the proximity to Dairy Queen.

Whatever it was, it meant that I had the privilege of spending an abnormal amount of time with this bunch of great “kids” and watch them grow up into goofy, talented and sensitive young men.

There will be more hangouts in the future. But they won’t be the same.

I’m keenly aware that it’s all part of growing up, raising a family and coping with an EMPTYING nest.

So there I sat. in my office within ear shot of the basement Wii U.

I was smiling and tearing up as I once again overheard the verbal jousting and laughter associated with the shenanigans of Mario, Yoshi and company, as they played an intense game of Smash this last time, as the “high school neighbourhood guys.”

I recognize that feelings of sadness come from a thought about my personal loss.

I have a choice about how I want to think of this important milestone. So I’m tweaking my thoughts. I don’t want to be sad.

I want to be excited about the adventure of growing up. I want to feel good about the contribution I made to these kids’ lives, no matter how small. Even if it’s just about their enjoyment of my amazing nacho platter.

The empowering thing is that you can decide how you want to feel and then think accordingly.

Change can be challenging, but we have choices.

I’m choosing to think more like Dalai Lama, who said, “Give the ones you love wings to fly, roots to come back and reasons to stay.” I know they’ll be back.

Are you dealing with an empty nest?

Check out my FREE download to help you bust out of your midlife funk about the whole thing and get busy with regret-proofing your life.

Best to dream big, plan, adjust and enjoy your life after your nest empties out too.