What You’ll Learn from this Episode about How Music has Healing Power for Neurodegenerative Diseases with CNN Hero, Carol Rosenstein: 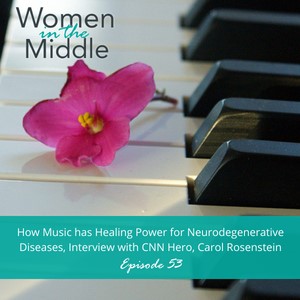 Did you know that music has healing powers for neurodegenerative diseases like Alzheimer’s? This week’s episode features an interview with Carol Rosenstein, Co-Founder of Music Mends Minds and 2018 CNN Heroes Award Nominee.

It’s another interview in my series called Weekly Wow. Weekly Wow introduces you to amazing women who have something relevant to share with women in the middle.

Carol is one of these women. She’s an unbelievably talented woman and has been recognized for her work creating musical support group bands for seniors with neurodegenerative diseases, such as Parkinson’s, Alzheimer’s, dementia, traumatic brain injury, stroke, and Veterans with PTSD. Since 2014, her nonprofit, Music Mends Minds, has created bands in the United States and Canada that have improved the quality of life for more than 200 people.

Carol’s story is interesting for so many reasons. Carol is now in her early 70s and is quite literally changing lives in such a meaningful way. It’s a reminder to all of us that you’re never too old to make a valuable contribution in the world.

Carol got involved in creating bands for seniors with neurodegenerative diseases in the first place because, as a caregiver for her husband Irwin, who had been diagnosed with Parkinson’s and Dementia, she realized that they she and her husband both needed help. Music definitely helped Irwin and having the support of other caregivers in such a fun and engaging way also helped her.

Carol explains how Music Mends Minds really does help restore the rhythm of life. She also reminds us all why it’s so important to “grow daily, stretch, dream big and reach for the stars”.

The Women in the Middle Academy (WITMA): WITMA is a six month, online coaching program and community for midlife women who are ready to create a life and career on their own terms and become the happiest, most free and fun version of themselves! This can be you! Don’t waste another second feeling stuck. Head over to www.womeninthemiddleacademy.com, book your free, no obligation “MOMENTUM” call and we’ll take it from there.