What You’ll Learn from this Episode about Career Change: The Decision to Leave a Medical Practice with Katrina Ubell, MD: 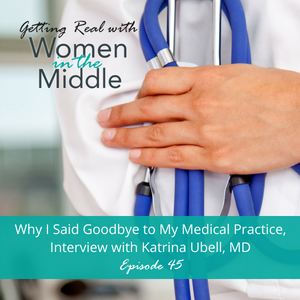 This week’s episode features an interview with someone who made a career change and said goodbye to a career she worked extremely hard to excel in, her pediatric medical practice. The interview’s part of the mini-series, Getting Real with Women in the Middle, where you’re introduced to an amazing woman in the middle who made a big scary decision so that she would be happier in midlife.

Katrina Ubell found herself questioning how happy she was as she transitioned into midlife. As a busy pediatrician, she loved helping people and working with children, but found the lack of flexibility in her job a real problem.

With a young family and aging parents, Katrina knew something had to change. She didn’t know how she would ever be able to manage and enjoy her career without being able to care for her family they way she wanted to. The internal conflict was real.

She felt trapped and extremely frustrated and started to entertain thoughts about retiring early. At first, the idea seemed crazy because so much of her life was focused on becoming a doctor. She wondered what people would think. She questioned if it was the right thing to do.

But, she also couldn’t ignore the feeling that while she was doing “everything,” she wasn’t doing anything well. She didn’t have much left for her family when she came home from work. Her mental and physical exhaustion at the end of the day was overwhelming.

Katrina decided to say goodbye to her medical practice and never looked back. By asking herself solution-focused questions, she realized there were other opportunities out there waiting for her where she could have the family life she wanted and continue to help people; after all, she was still a doctor at her core.